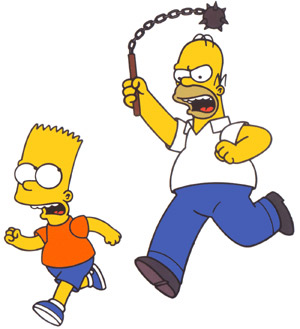 I Say this Because..

As a Little’ Un, I was smacked once or twice, (clearly it was soooo devastating that I can’t even remember how many times I was hit!) and in spite of this I think I have turned out relatively okay!

I was hardly a hellish child and my crime was forgetting to bring my swimming cap to the swim baths and getting my hair wet, in spite of valiantly trying to keep it dry. (Damn those dive bombers!)

Earlier on this year, in a similar conversation online, I was told by a young gentleman who sounded like he had swallowed a thin pamphlet on the psychology of child hitting, that despite my insistence that I had not yet hurt any cats or hit people or ‘gone postal’ as a grown up, that I was in fact deeply and traumatically disturbed and hurting inside and just didn’t know it. This was a bit like telling someone they had an incurable deadly disease however, it would never cause pain, it would not in any way alter their life, hurt them or kill them.

I have to also differentiate between a tap on the hand or bottom administered way after the ‘crime’ by a calm, measured parent and horrific, purposeful and sustained child abuse. There is a difference. Your answers will enlighten me as to whether that difference is still considered unacceptable in today’s world.

So School Me People!

Is smacking a child today ever acceptable?

278 thoughts on “Is Smacking A Child Acceptable?”

Some of you might have noticed that I have been a very naughty blogger of late and not been blogging frequently. Until I can claim some hours back quite a few of my posts will probably have ‘no comments’ because I just can’t find the time and I always like to reply to everybody’s comments!

However I will be trying to keep visiting as many of my old (and new) blogging pals as possible, ‘cos I love catching up with y’all! – It’s one of my favourite things to do when I can conjure up more hours. I’m also grafting hard over on Tinterwebs on The Überbook HERE and can often be found commenting there so feel free to come and chat to me and the folks over there on that chat board at any time too!

More From The Sourcebook Magazine